The Birth of Christ part 3

“Now in those days a decree went out from Caesar Augustus to register all the empire for taxes. This was the first registration, taken when Quirinius was governor of Syria. Everyone went to his own town to be registered. So Joseph also went up from the town of Nazareth in Galilee to Judea, to the city of David called Bethlehem, because he was of the house and family line of David. He went to be registered with Mary, who was promised in marriage to him, and who was expecting a child. While they were there, the time came for her to deliver her child. And she gave birth to her firstborn son and wrapped him in strips of cloth and laid him in a manger, because there was no place for them in the inn.” Luke‬ ‭2:1-7‬ ‭NET‬‬ 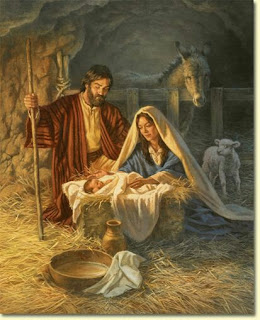 Did you know that it was prophesied that Jesus would be born in Bethlehem hundreds of years before his birth (Micah 5:2)?

Have a blessed holiday
Stephanie
Posted by One life one journey one truth at 1:00 PM

One life one journey one truth

Please note that although I welcome feedback I will not allow posts with profanity or those that want to argue.